After some navigational issues on route to our Air BnB (there were TWO Broadway streets in the same small area!?).. We arrived to find two Chihuahua’s and a “cat that comes and goes” – I was very happy about this! We got ourselves settled in and took a walk around the quiet neighbourhood to buy some groceries. We got to work on editing go pro videos and our blog. After this we headed out to a local Italian restaurant and treated ourselves to a delicious dinner (90% carbohydrates).
Returning to our room we were met with a heat that felt like a steam room. Sadly, there was no air con for us!! It was a pretty uncomfortable night.
In the morning we took our last trip in the Mitsibushi Mirage. It was time to take the lil dude back to Dollar Rentals downtown. We were sad to say goodbye! In the end we drove 2,844 miles in that bad boy. 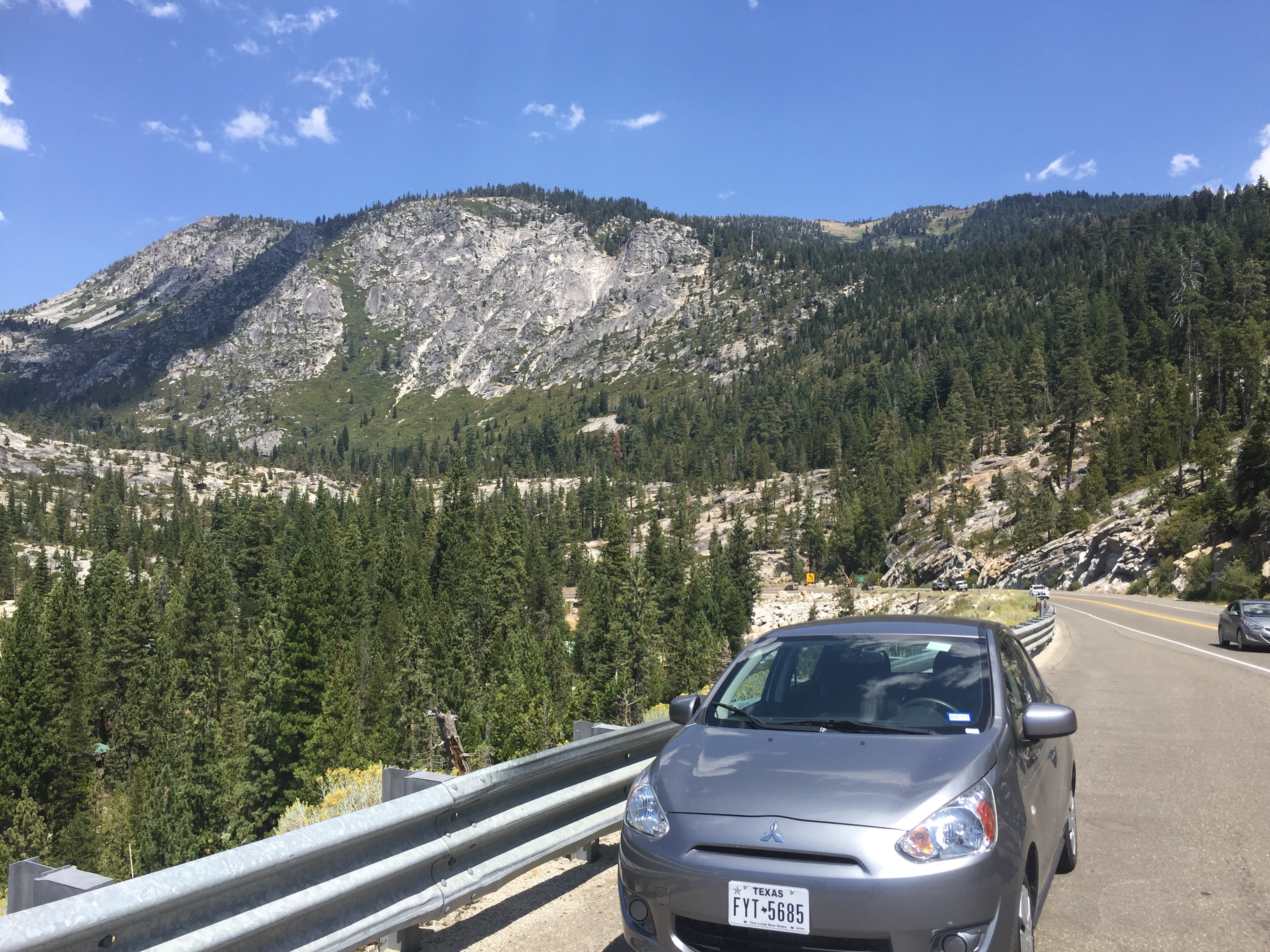 Today was the day I got to realise my Crossfit dream, by visiting and working out at the famous Crossfit Invictus! The home of my favourite female crossfitter Lauren Fisher! But first we had to get there …
Now, car – less, we had to figure out our way around town on foot or by “trolley” which is San Diego’s Tram system. After a short walk from the rental centre we got to a trolley station. After much frustration with the ticket machine (it didn’t like our British debit cards) and only took exact dollars).. We took a risk and hopped on ticket-less! Whoops. Luckily we got away with it.
We got off at 12th Street and College to take a short walk to Invictus!!! I could barely hold in my excitement. Skipping along the street we finally saw the big green V. We had arrived! We took the 12 class with Holden (Crossfit Games Team Competitor) which was a ‘performance class’. It consisted of Snatch technique and a conditioning partners wod of wall balls and burpees. 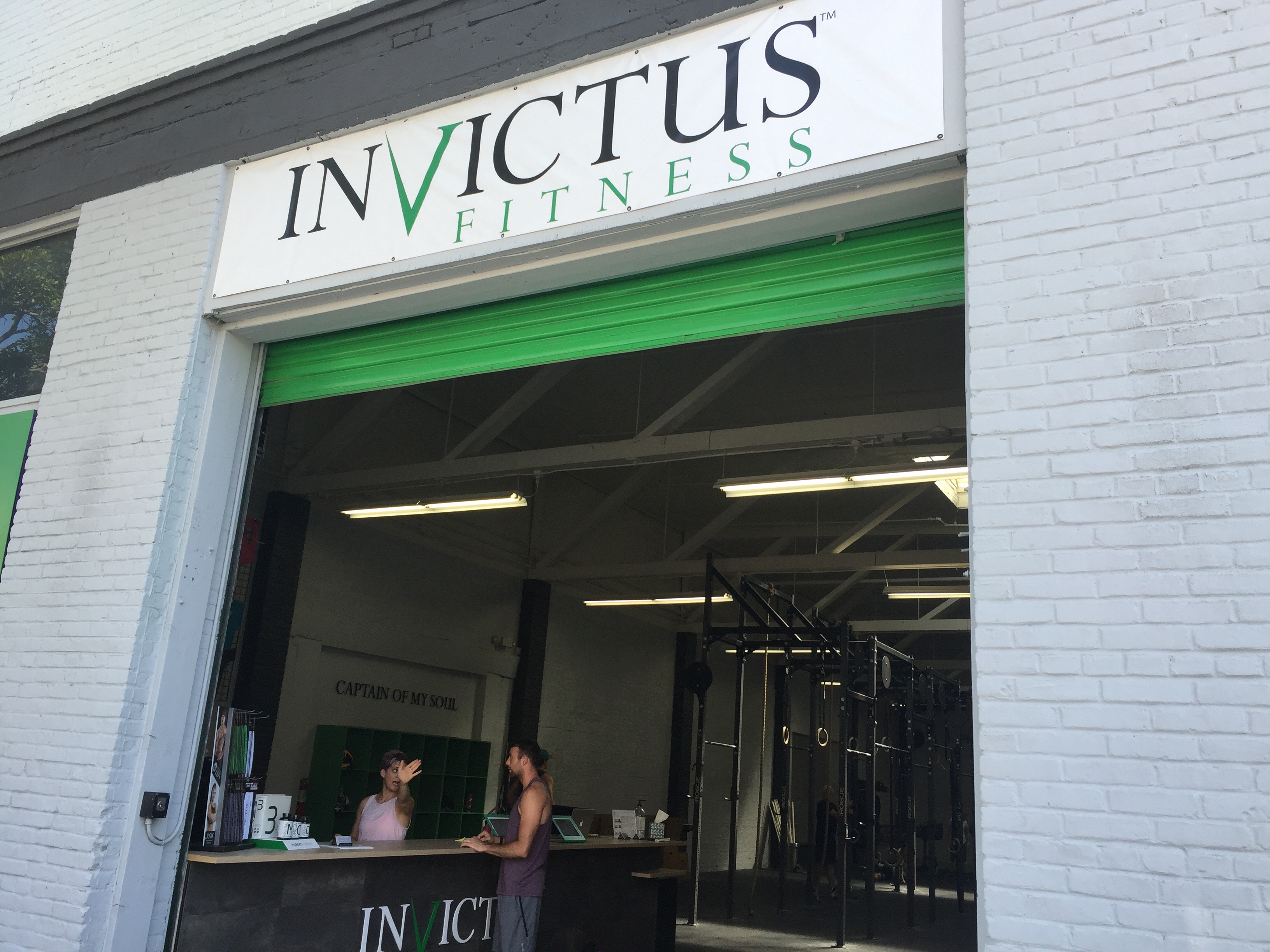 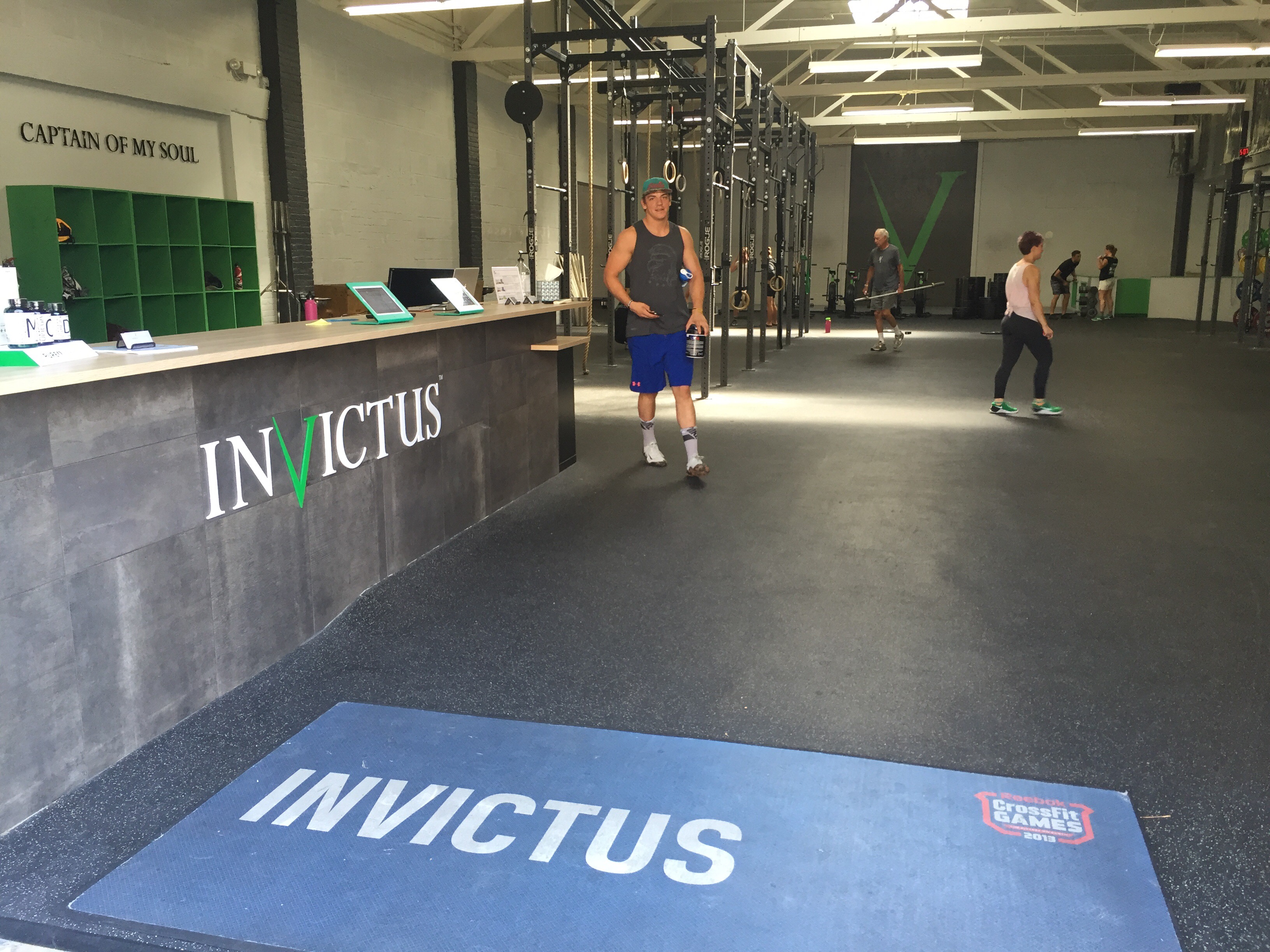 It was a great experience to be coached in this particular Olympic Lift by somebody so experienced and talented. For me, Snatch has always been the hardest skill in Crossfit to learn. I’ve battled with a few mobility issues and also have struggled to drop quickly under the bar to catch it in the bottom squat position. Holden gave me some good pointers and I feel that I now know what I need to do to keep improving. A lot of my issue with getting under the bar was to do with the angle of my back. My chest has been too far forward and my hips haven’t been fast enough. I’m excited to get back into training and get some heavier weight on that bar!
Sam and I felt that we performed pretty well in the wod, especially since burpees are not his favourite. I would say that burpees are particularly difficult if you are tall with long limbs (Sam!). He has a lot of Femur length to negotiate with!
Feeling truly exhausted and very sweaty we got to chat to Crossfit Games Athlete Garret Fisher! (Lauren’s older brother AKA Big Fish). We talked briefly about his Crossfit games performance and he’s already back into full time training for next years Games. We were sad to find out that Lauren was actually in surgery that day to sort an ongoing issue with the ligaments in her ankle. We wish her a speedy recovery!
Looking sweaty we got a quick photo with Coach Holden… 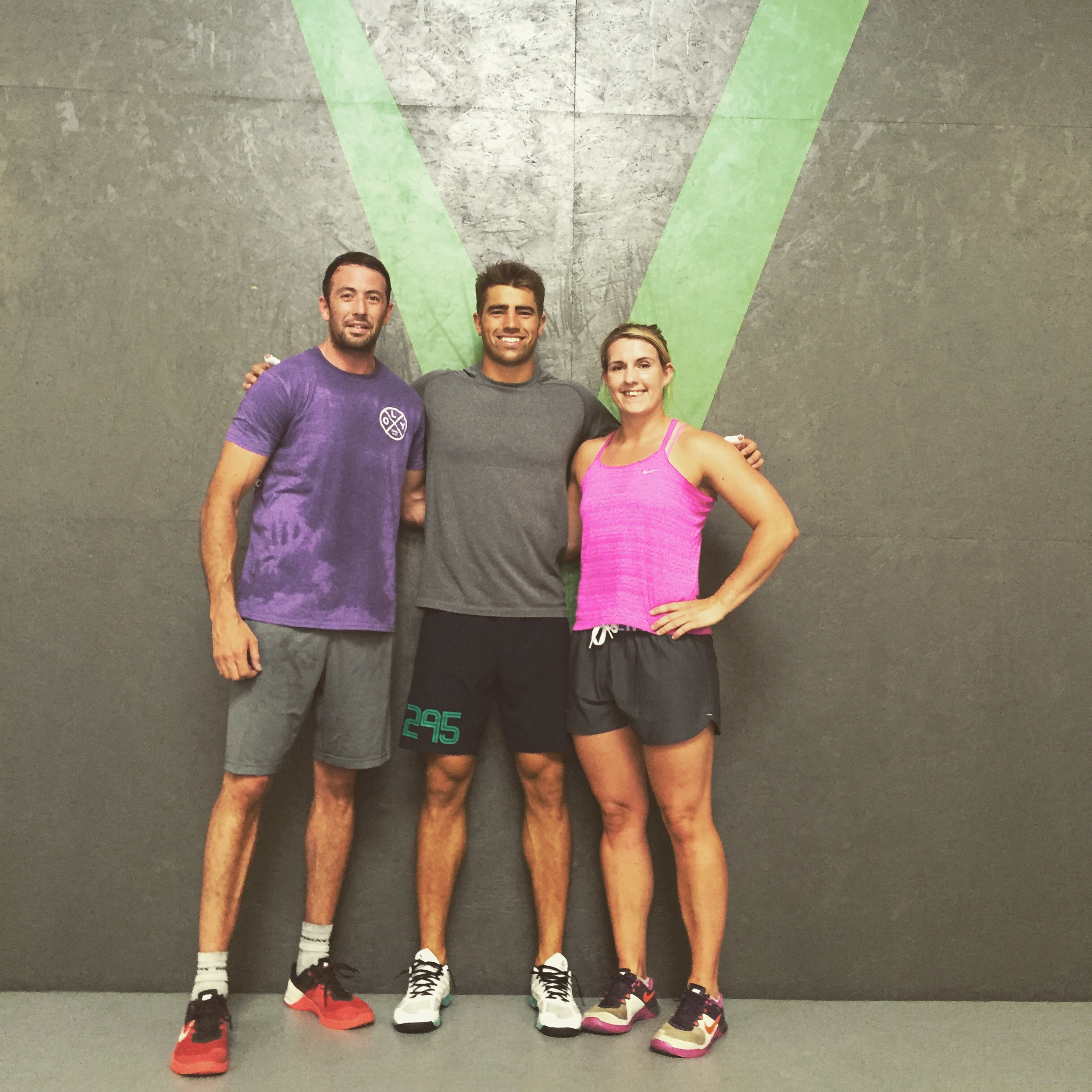 Feeling content with our workout and dose of sunshine we hit the Interstate Highway 15 south to Temecula. We booked a hotel in this town since it wasn’t too long a journey but about half way to our next stop – San Diego. Knowing nothing about the town we rocked up with little expectation. We were pleasantly surprised to find a quaint Old Western looking town! The buildings were full of character with pretty fairy lights for embellishment. The streets were so clean in comparison to the big cities we have been visiting. American flags were proudly flying in the streets and the smell of American food wafted towards us. We instantly loved the place. We were also very pleased to find a hotel swimming pool! 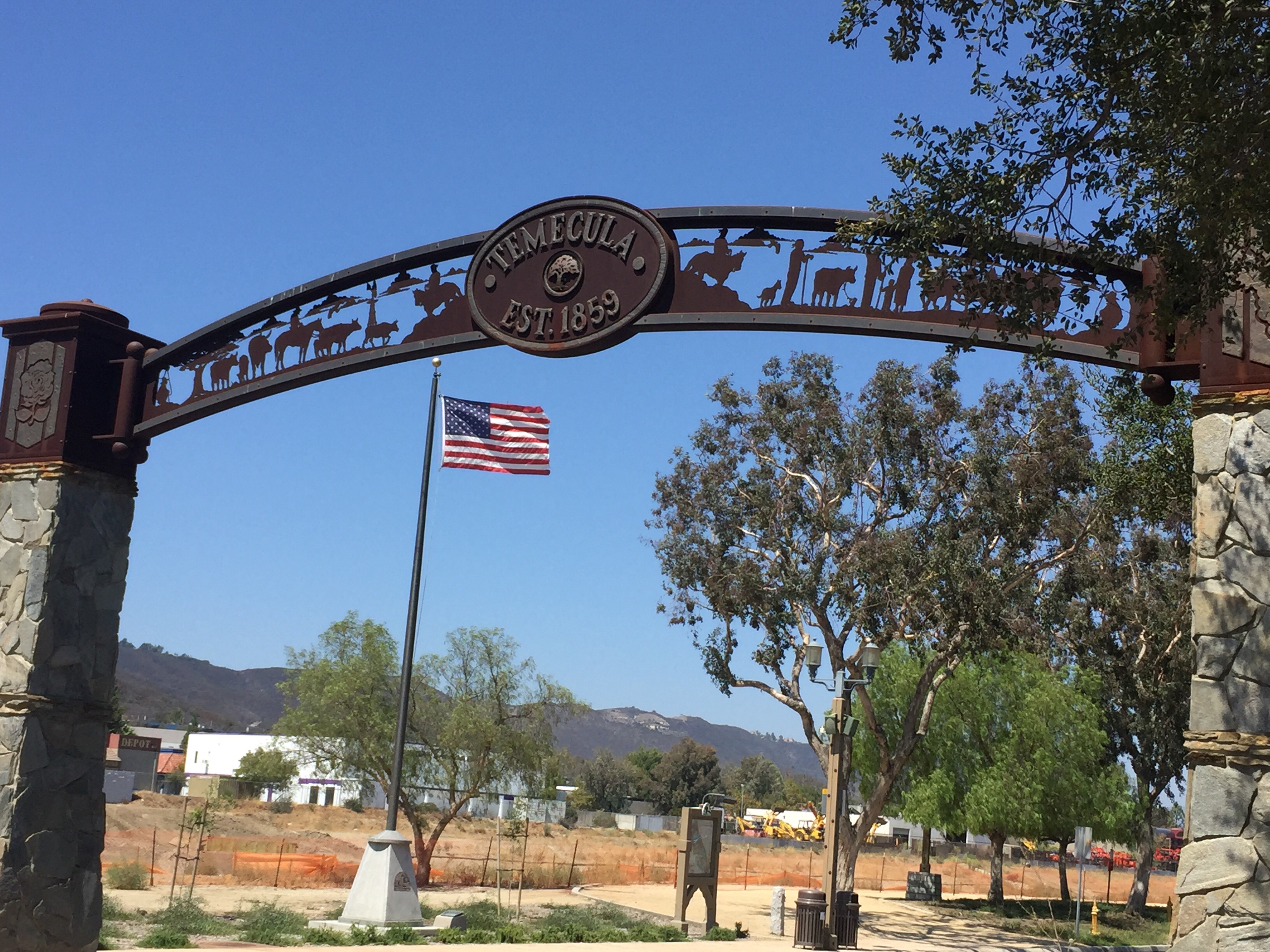 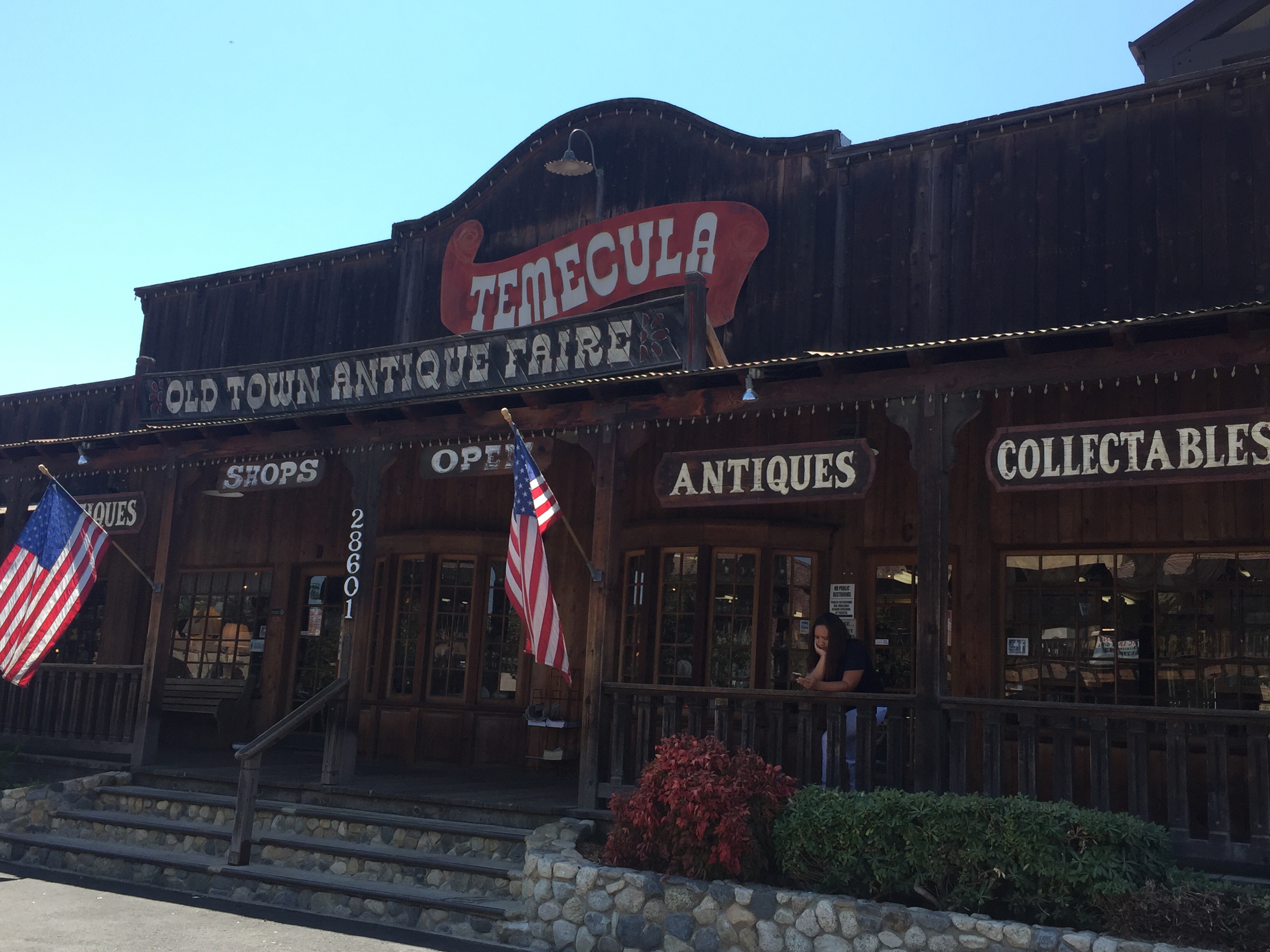 After a comfortable nights sleep we woke early to get to work. I devised a short WOD consisting of 2 rounds: 4 laps, 10 push ups (these felt challenging as we were suffering from major chest DOMs) and 20 squats. It was a short but very effective workout! We could both feel the strain on our muscles from the previous day at Muscle Beach.

Our plan for the morning was to relax, walk around this pretty town and pick up some souvenirs for family. Then of course, drive to San Diego in the afternoon. 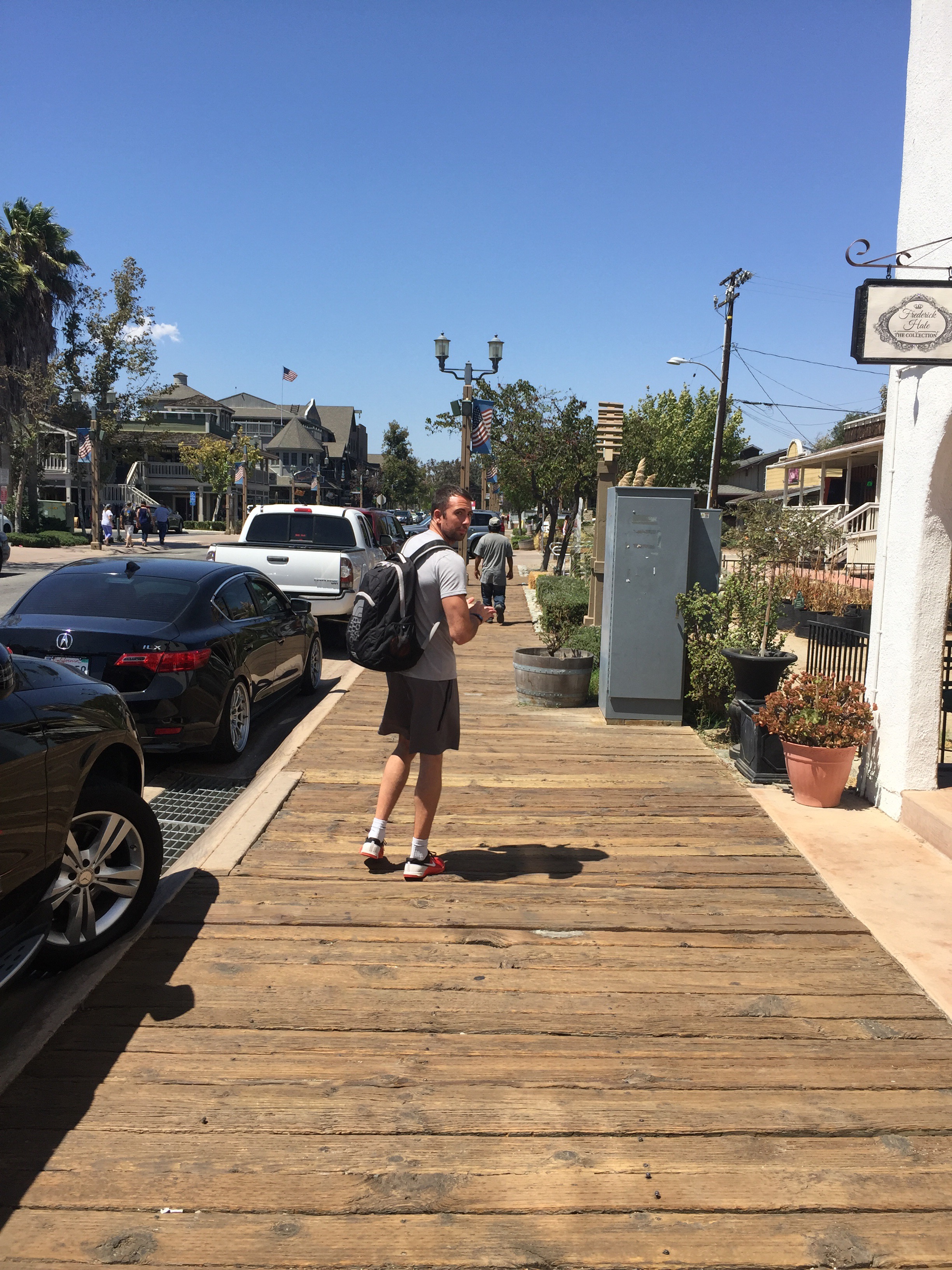 We found a really lovely Cuban cafe for brunch. This filled us with some good healthy carbs and protein. On to our next stop… 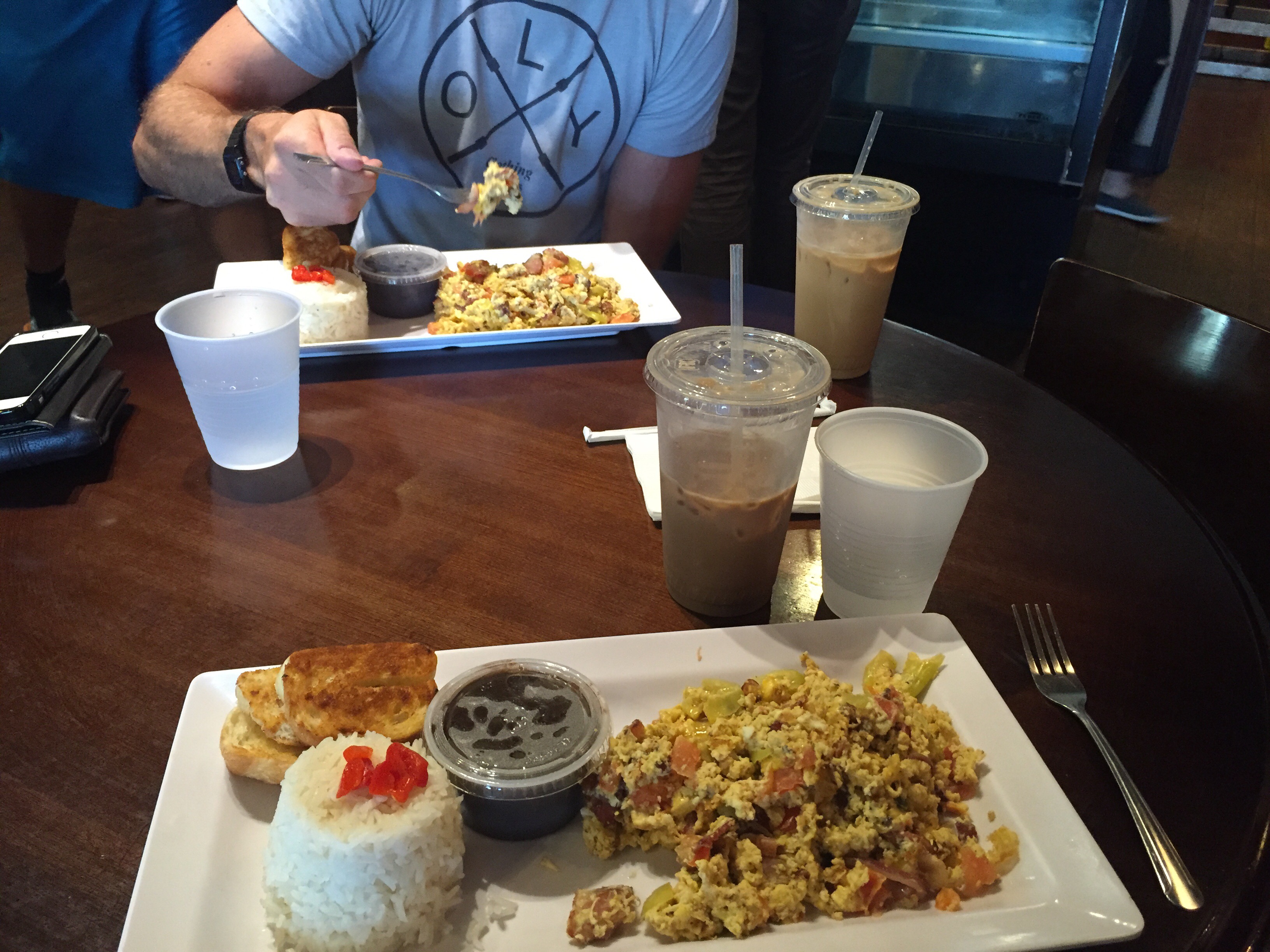 Following an incredible day exploring Death Valley we continued our journey south west back towards the coast. We stopped over in a town called Ridgecrest – it was an interesting stay to say the least! The town looked like something out of the Hills Have Eyes.. It was so spooky. A total Ghost town. Abandoned houses with boarded up windows and doors.. Old mining facilities closed down.. It was very eerie. We didn’t hang around!
Another early start for us and back in our trusty little Mirage. After much map flipping and negotiating aggressive traffic we finally made it to LA! No guessing our first port of call… Yep. Venice Beach AKA Muscle Beach. Body building’s equivalent to Mecca. It really did not disappoint! The place was buzzing with busy Cafes, street performers, sidewalks bursting at the seems with skateboarders and rollerbladers. It was just how I imagined and better! The beach itself was quite something – stretching for miles with its golden sand and surf friendly rip curls. Much like Santa Cruz, the beach was alive with family BBQs and sports.

After we managed to weave our way around a protest, groups of break dancers and street artists, we eventually set eyes on the main attraction. Muscle Beach outdoor gym. We showed our military ID and got into the caged area half price (thanks Her Maj). 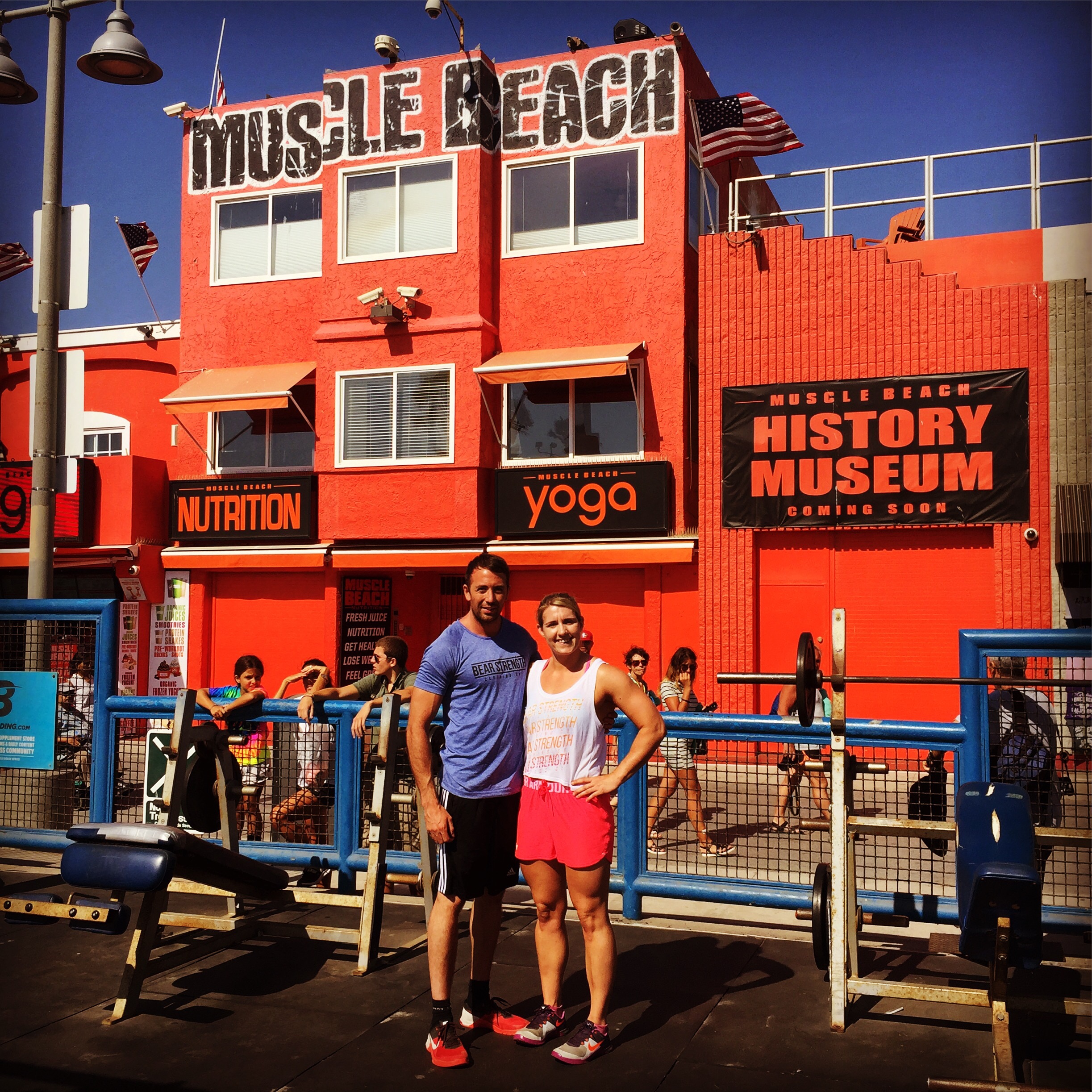 The gym was fairly quiet. There were a couple of guys training quietly on the machines, taking in the sunshine and posing for the walkers by. Then there were the two performers! Two guys hired by muscle beach gym, who’s sole job is to flex for cameras and practice their moves. They were pretty impressive to be fair! In the hour and a half we were there, I’d say approximately 100 selfies were taken by these guys! Hilarious! 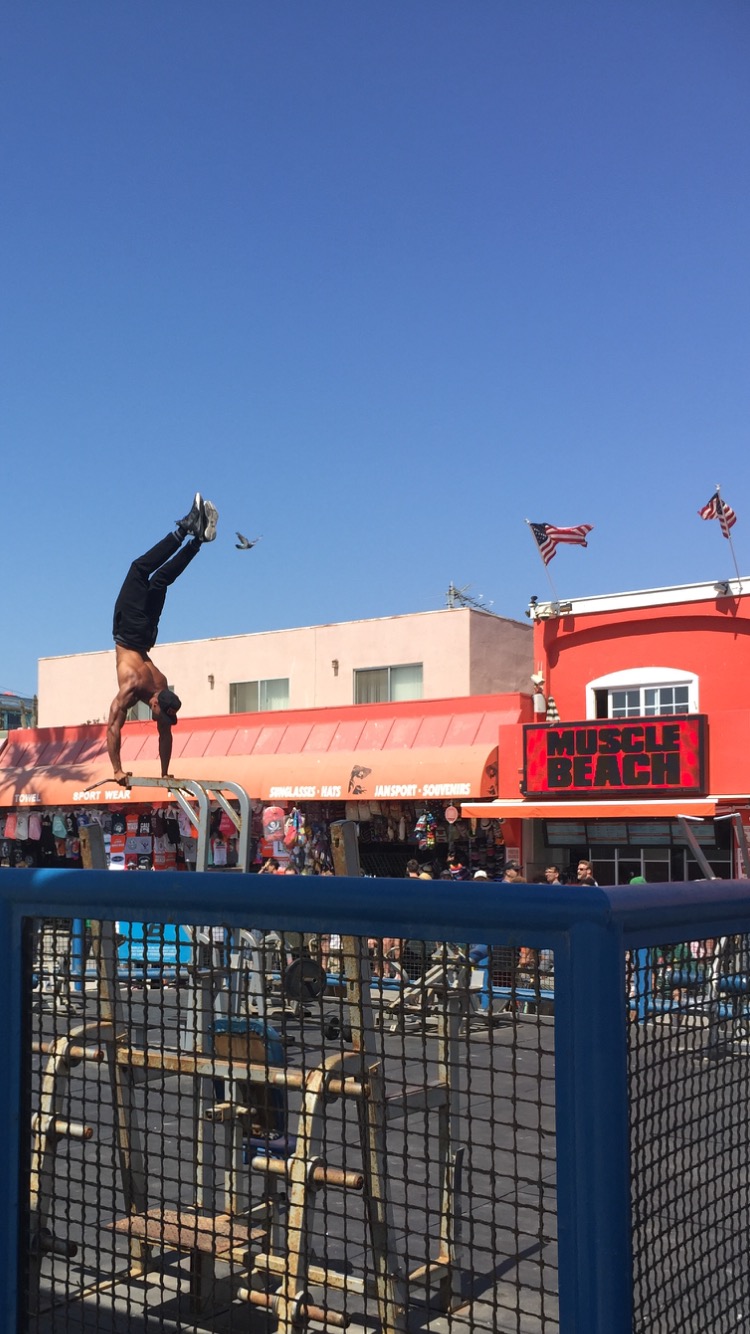 Sam and I decided to use whatever equipment was free. We ended up on the bench press (our fave!). It was really difficult in the heat and with the sun directly in the eyes whilst lying flat on the bench. Especially using bars and plates in Lbs which we are not used to. However! We both lifted heavier than we normally manage in training. After a couple of sets of 5-3-2 reps we decided to get more weight on the bar. Maybe it was the onlookers, or all of the naughty carbs we have been eating, but I managed to bench 84kg! Sam normally hits about 90kg in training, but he also managed a much hire number for one rep at 97kg! After bench press we hit our normal 3 x max effort dips and also pull ups. After a sweet upper body pump sesh we spotted a space to do some deadlifts. Using the kit available we ended up doing 3 sets of 5 reps fairly light for us. The heat began to take its toll and food was calling us! We had a great session and got chatting to some really nice guys from Chicago who were also on a similar trip to us. It was a fun day all round!
We reluctantly pulled ourselves away from the gym and sat down on the beach with a mini picnic we picked up on route. We had an awesome raw broccoli salad and a sandwhich! It felt good to get some greens in. 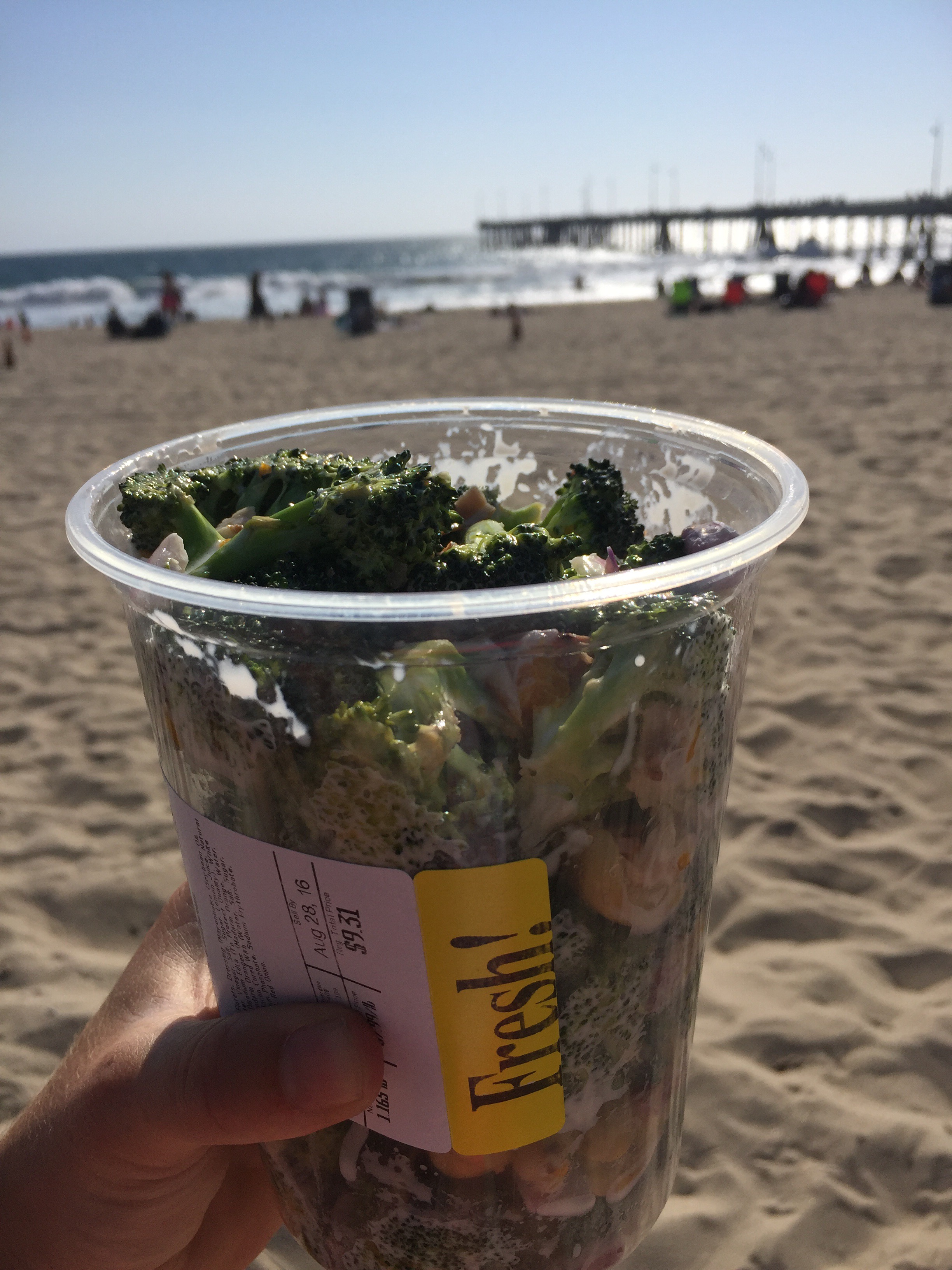 Refuelled we headed back to Mecca and finished up our session with some gymnastics. Rope climbs, muscles ups and skin the cats! Feeling suitably pumped we called it a day. We left the bright lights of LA and hit the freeway to our next hotel in a little town called Temecula.