The first Royal Navy Crossfit team made an appearance at the Coalition Games on the 22nd & 23rd October 2016.

Having received an out of the blue message from Royal Navy Lt. Alex Kelley, I unexpectedly ended up on the Royal Navy’s first ever crossfit team!

Alex Kelley, a keen crossfitter and all round super fit sport enthusiast, invited me to join her team of Matelot Crossfitters to compete at the Coalition Games. A two-day crossfit event in Cardiff. 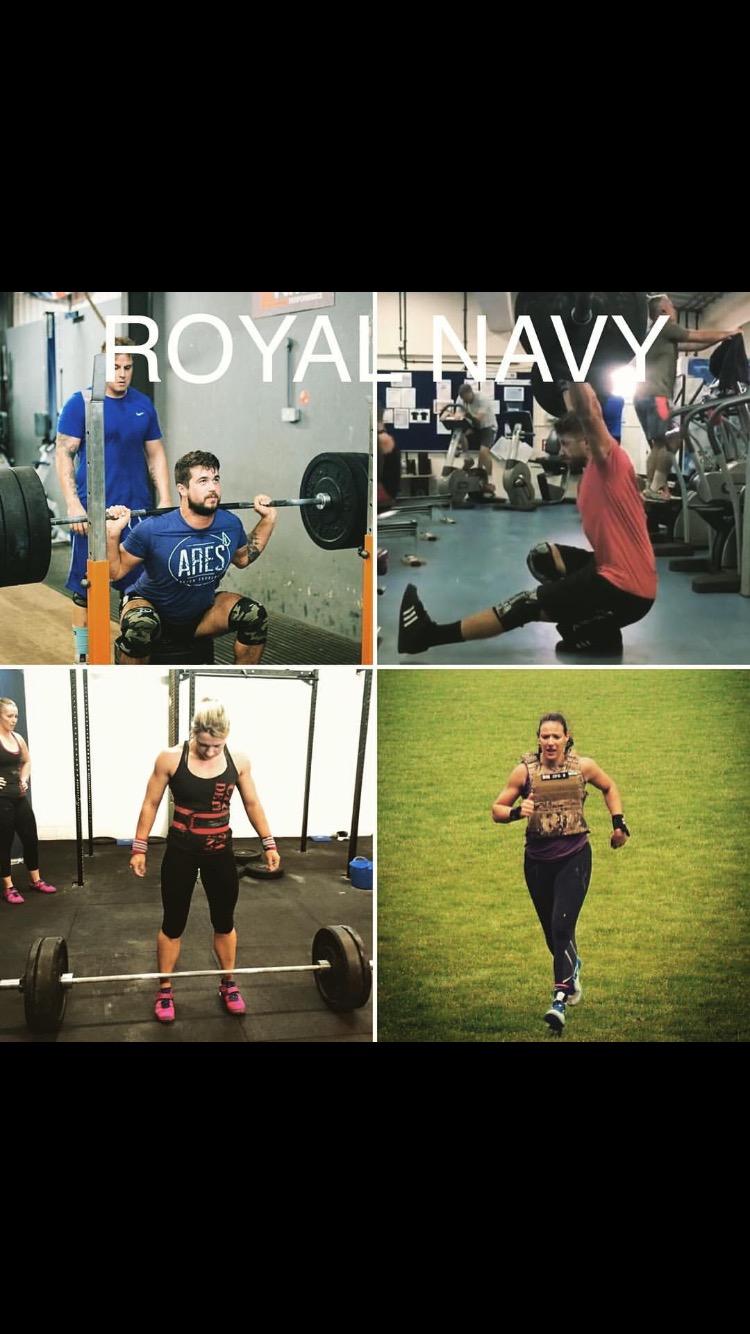 Teams consisted of two men and two women. Alex and I were teaming up with super strong squat king Michael Park – AKA “Parkey”, an aircraft engineer travelling from his base in Portsmouth. We were also joined by a very gymnasty Steve De’ath, who amazingly has only been crossfitting for a year. You would never have guessed from watching his slick toes to bar and effortless squat cleans! Steve, also an Aircraft Engineer, travelled all the way from Cornwall!

Once the team completed the epic journeys from around the UK, we got a few hours kip at Alex’s place in Cardiff, scranned up and circled Cardiff a little before arriving nervously at the venue! Alex did an excellent job sourcing some very patriotic Royal Navy team vests and shirts for us! Nice bit of PR for recruitment. 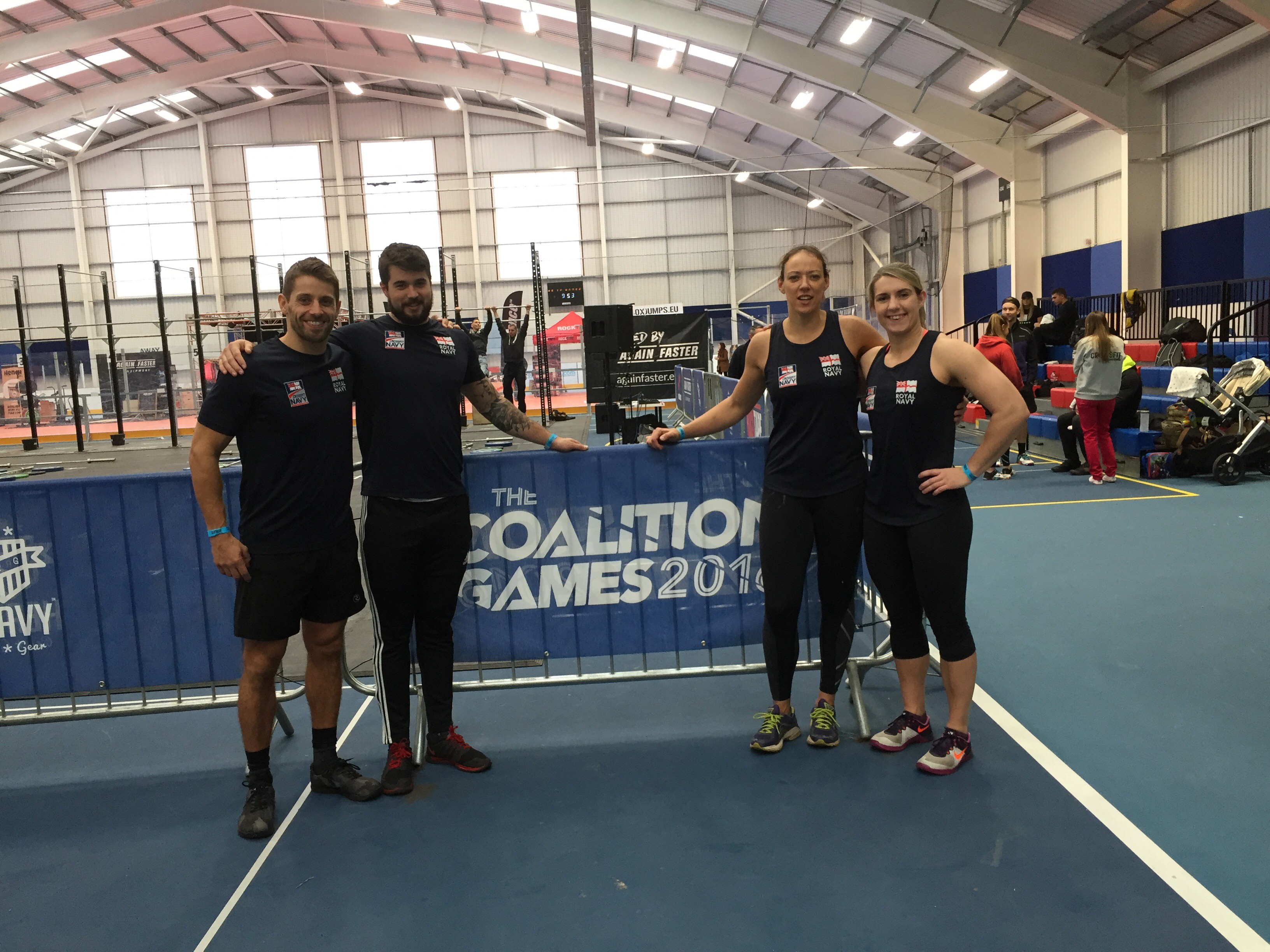 I had never met my team mates before so I felt slightly nervous. Worried I’d not quite live up to their expectations in terms of skill / fitness, I found myself feeling a little anxious in the lead up to the competition. The event organisers released a couple of the WODs prior to the event. This settled my nerves somewhat as it meant I had two weeks to perfect some of the skills and test my strength / fitness. I even coerced Sam into being my guinae pig to test the wods!

The wods released were as follows: 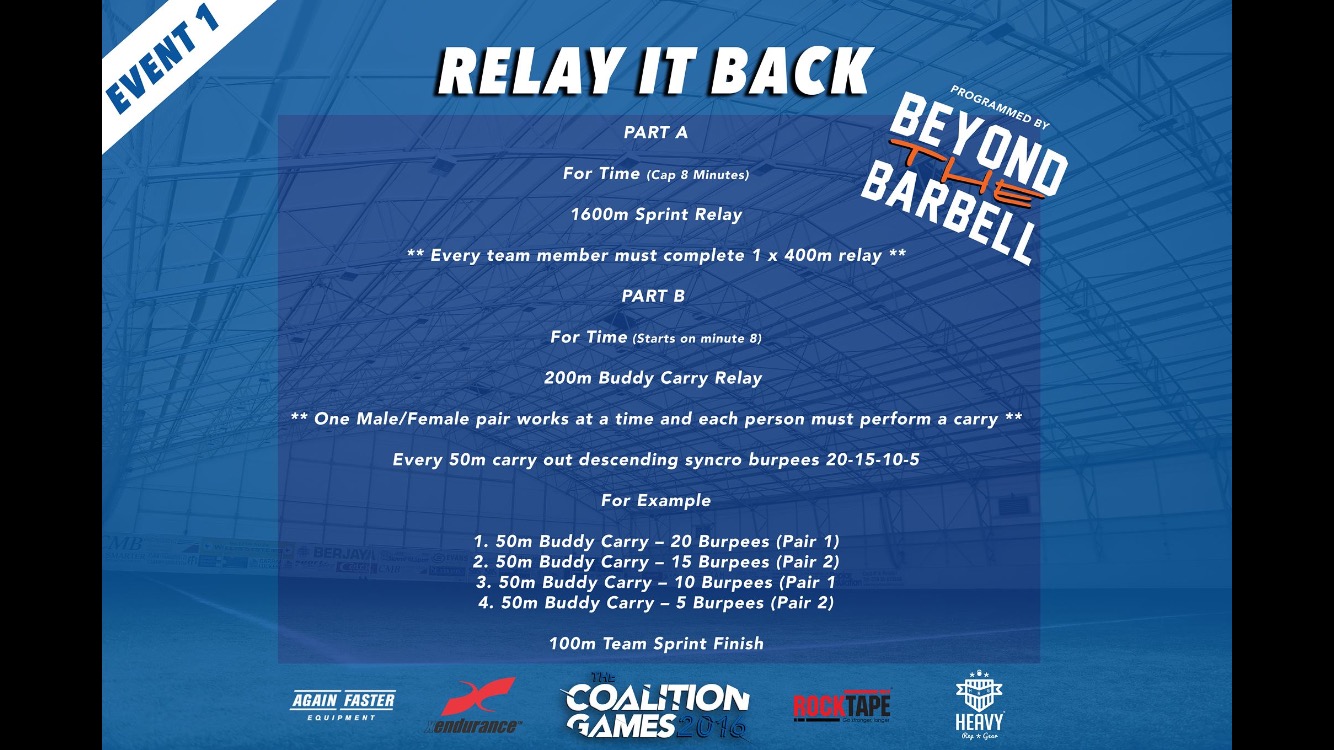 Having done a few partner carries in my time – I quite liked the look of this one!

Alex being a tall and more endurance type athlete – we decided she would carry Steve (the lighter of our male team mates) and I’d carry Parkey and his over sized quads!! Weighing in at 88kg, it was no easy feat. But the wod went well for us; Alex’s awesome engine, Steve’s super quick burpees and Parkey scooping me up King Kong style, meant that we put in a pretty decent time. We were chuffed with how our competition kicked off. 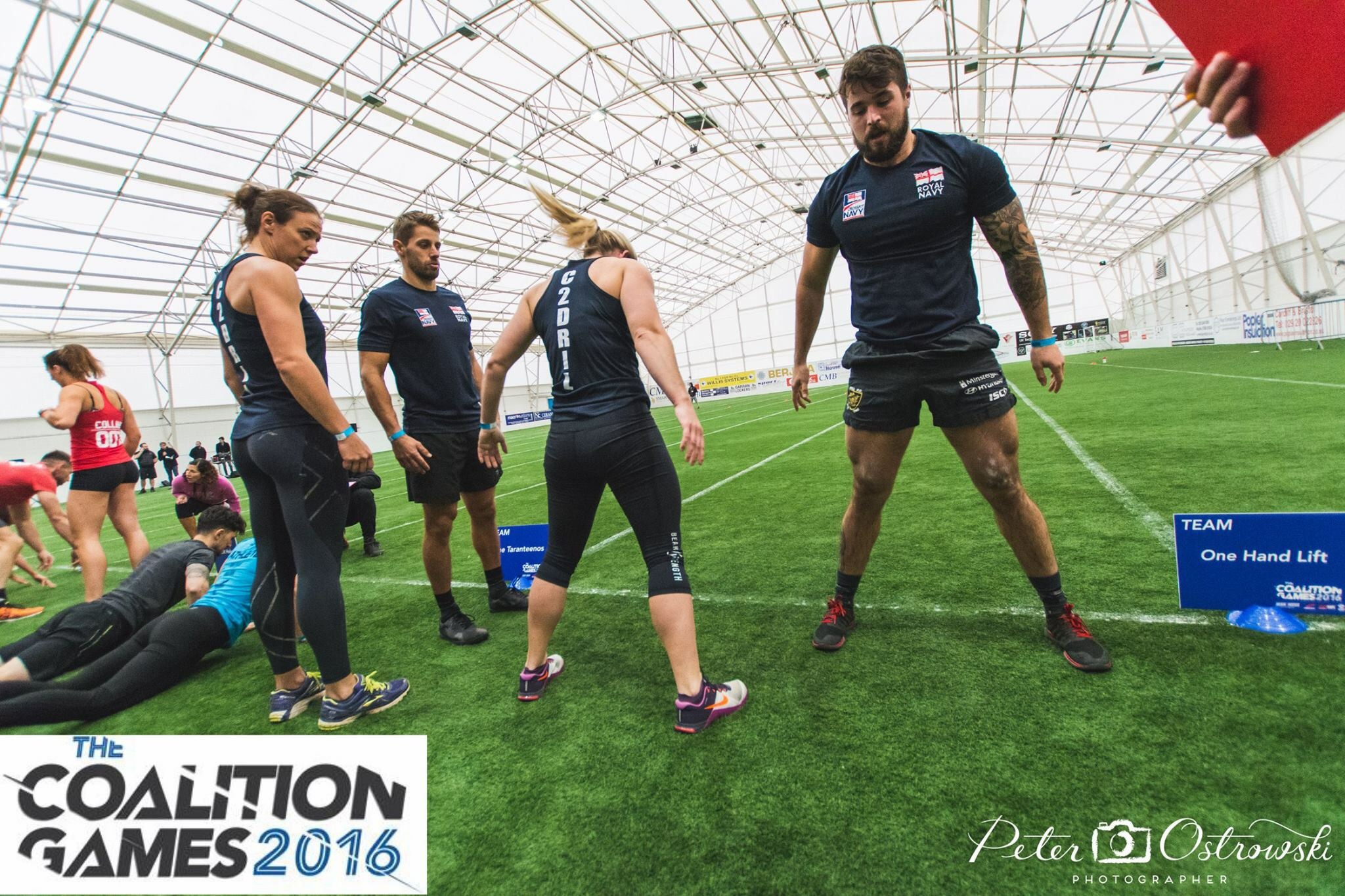 After a quick refuel and obligatory coffee pit stop we felt excited to tackle WOD 2: 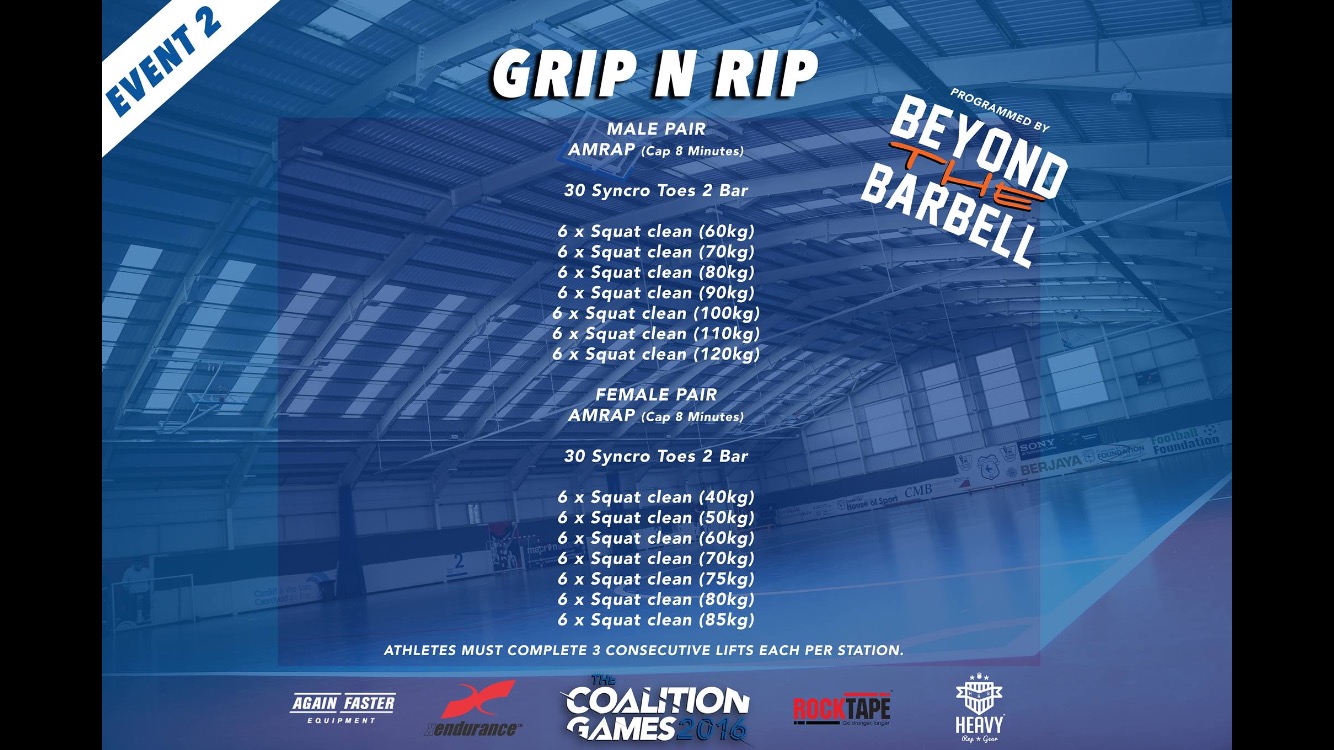 Squat Cleans are certainly not a strength of mine. So I practiced this wod at least 3 times before the competition. In training I managed to PR my squat clean and successfully complete 1 rep at 80kg. I knew straight off the bat I wouldn’t finish this Squat Clean Ladder – so my tactics would need to change. I wanted to give myself enough rest to make sure I didn’t fail any of the reps at 75kg. After chatting with Alex I learnt of her recent hip injury and so we decided I’d go first and finish the 3x 75kg. We successfully reached this point within the time cap and it gave Alex a minute or two to get through the reps at 75kg. She fought very hard and we were chuffed with our efforts. Parkey and Steve made the toes to bar look absolutely effortless and demonstrated some awesome squat clean tekkers! Though we didn’t finish very highly on the leaderboard for that particular workout, we were all really chuffed with our individual performances!

The final wod of day 1 consisted of: 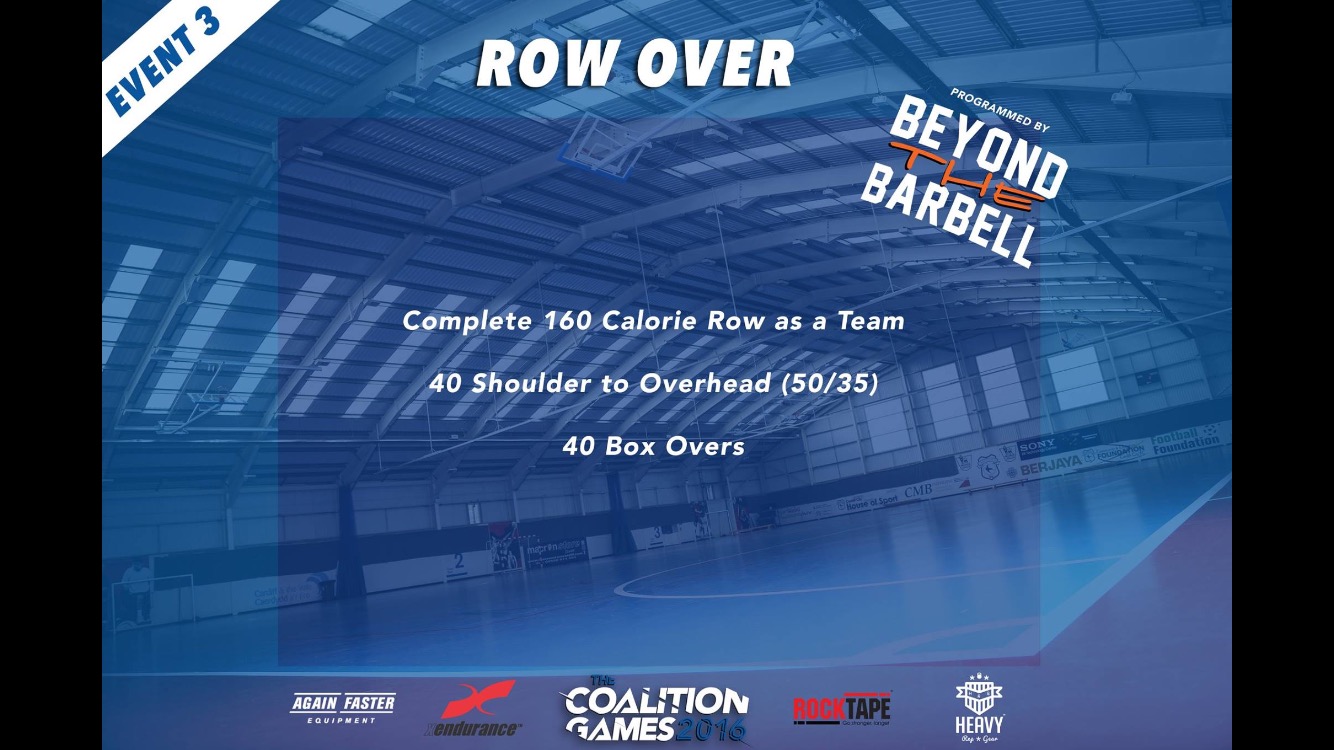 When I saw this wod… I felt a little sick!! It’s no secret that I find rowing particularly tough. It is also no secret that I rely a terrible amount on brute shoulder strength for my Push Jerks. In the lead up to the competition myself and Sam practiced this wod a couple of times. And I also worked on that push jerk technique. But this did not settle my nerves.

However, getting to know Alex, I soon figured out that she was our equivalent to Sam Briggs. An absolute engine. And a keen rower! Awesome. Steve bravely set off first, making easy work of the push Jerks and box jumps. Alex smashed the row for the team. She took on most of the calories and still had the lungs to race through the push Jerks and box jumps. It was my turn and I dragged my sorry butt through those reps as best I could. Safe to say the shoulders were blown out come the end! Poor Parkey was our last team member in the relay – which put a hell of a lot of pressure on the young athlete.

Steve, Alex and I had finished our work for the day whilst Parkey was left slaving over the last 40 box jumps. Unfortunately for him, we had enough energy to encourage (scream at him to keep moving) until the bitter end! Parkey did us proud. 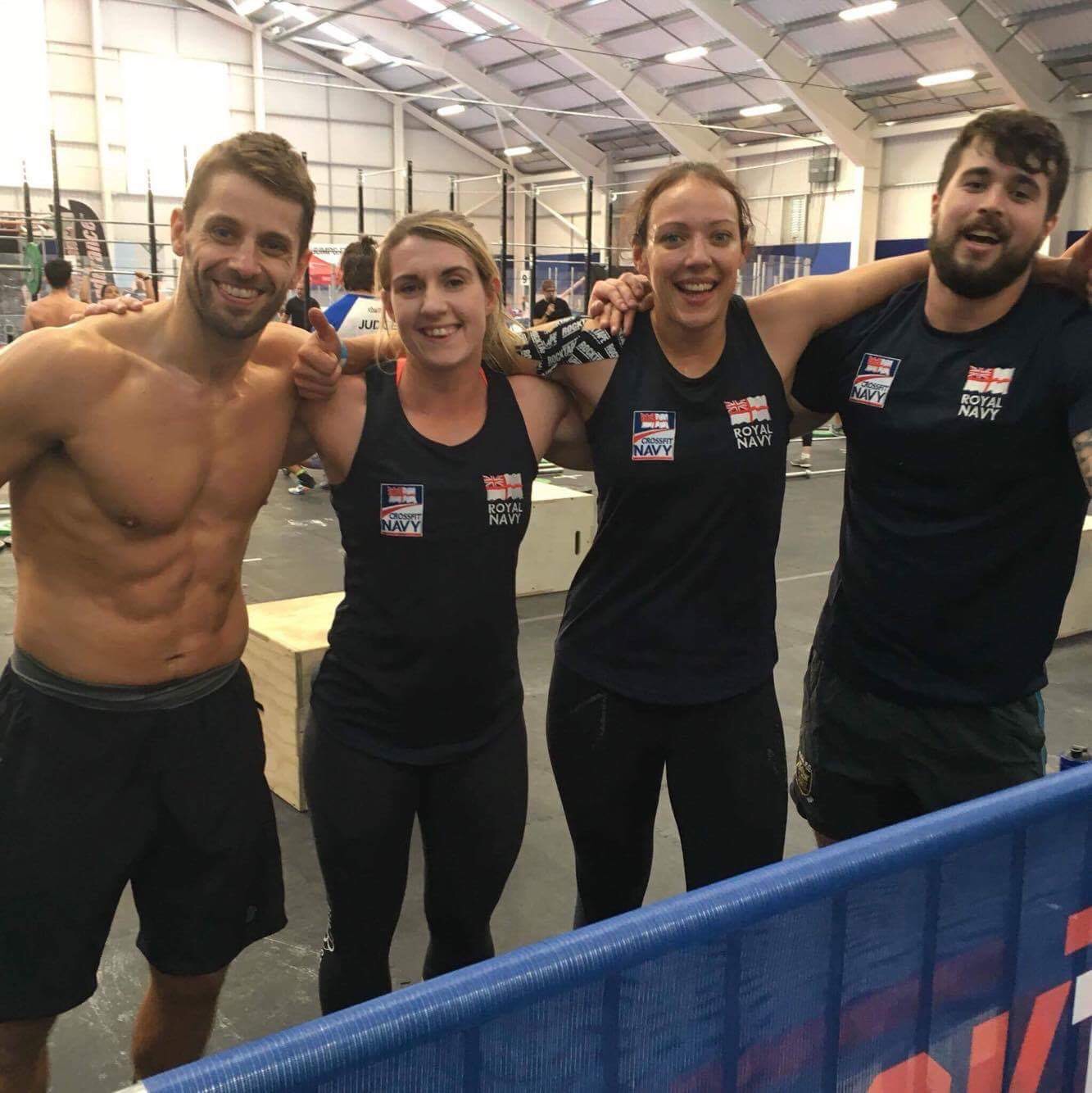 Our Saturday night could be summed up as follows: Shower. Protein and carbs in the form of a Nando’s. Bed. 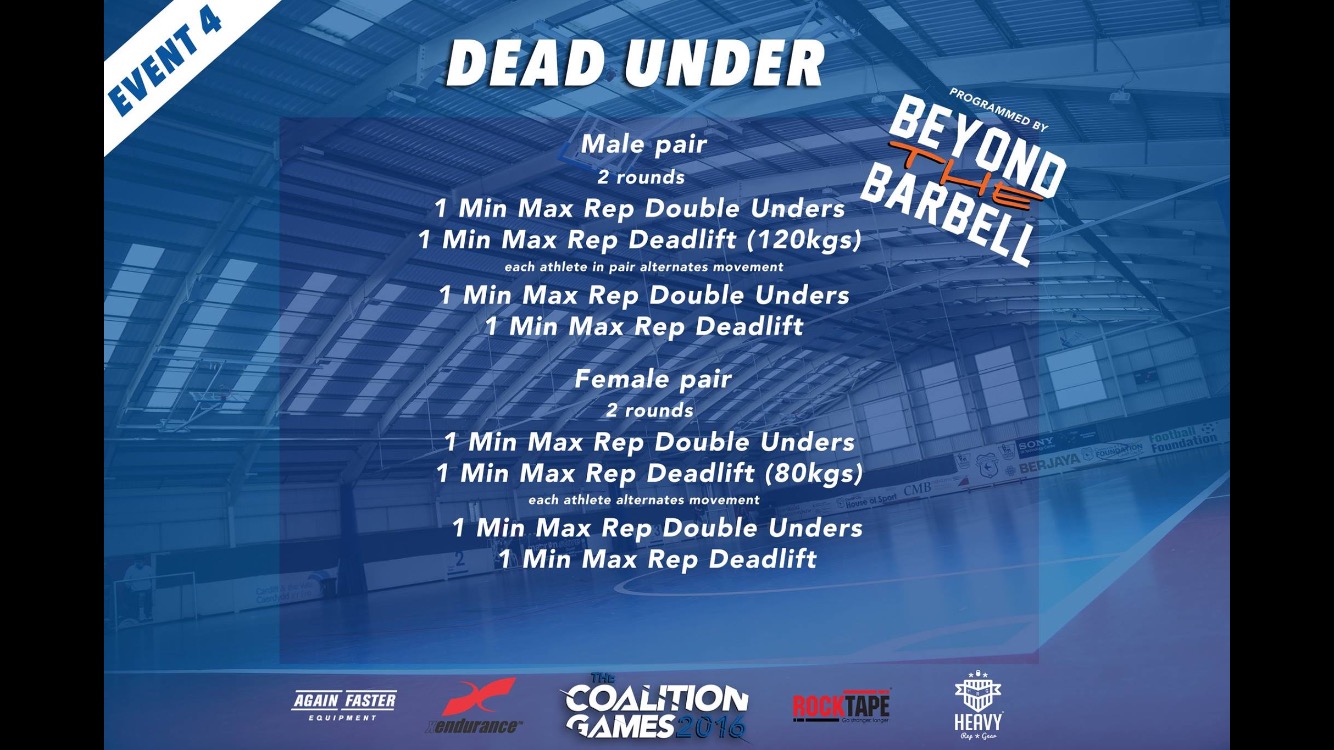 As the horn sounded, Steve blasted through a minutes worth of deadlifts. Making the bar look light he then began his double unders – something he admitted was not his strength. And it is NOT easy gripping that rope whilst combatting the deadlift jelly legs. But he did a fantastic job and clocked up some decent points for the team. With his forearms screaming he slumped in a heap. I looked at him and saw the pain we were all about to endure! (It’s at this point you realise how crazy Crossfitters must be). Parkey’s turn – did we forget to put weight on that deadlift bar?? Easy money for them legs. Straight into his doubles looking calm and collected and his work was done! Time for the girls AKA Wrens!

I opted to get it out of the way first. The truth is – I do like a deadlift. My current one rep max is 160kg, so I felt comfortable repping 80kg. My double unders on the other hand – can be hit and miss! However, luck was on my side and I was very pleased with 120 reps in 60 seconds!

Alex took us to the finish line in style. Repping out 5 unbroken deadlifts at a time and some super smooth double unders she put in a great score for the team. 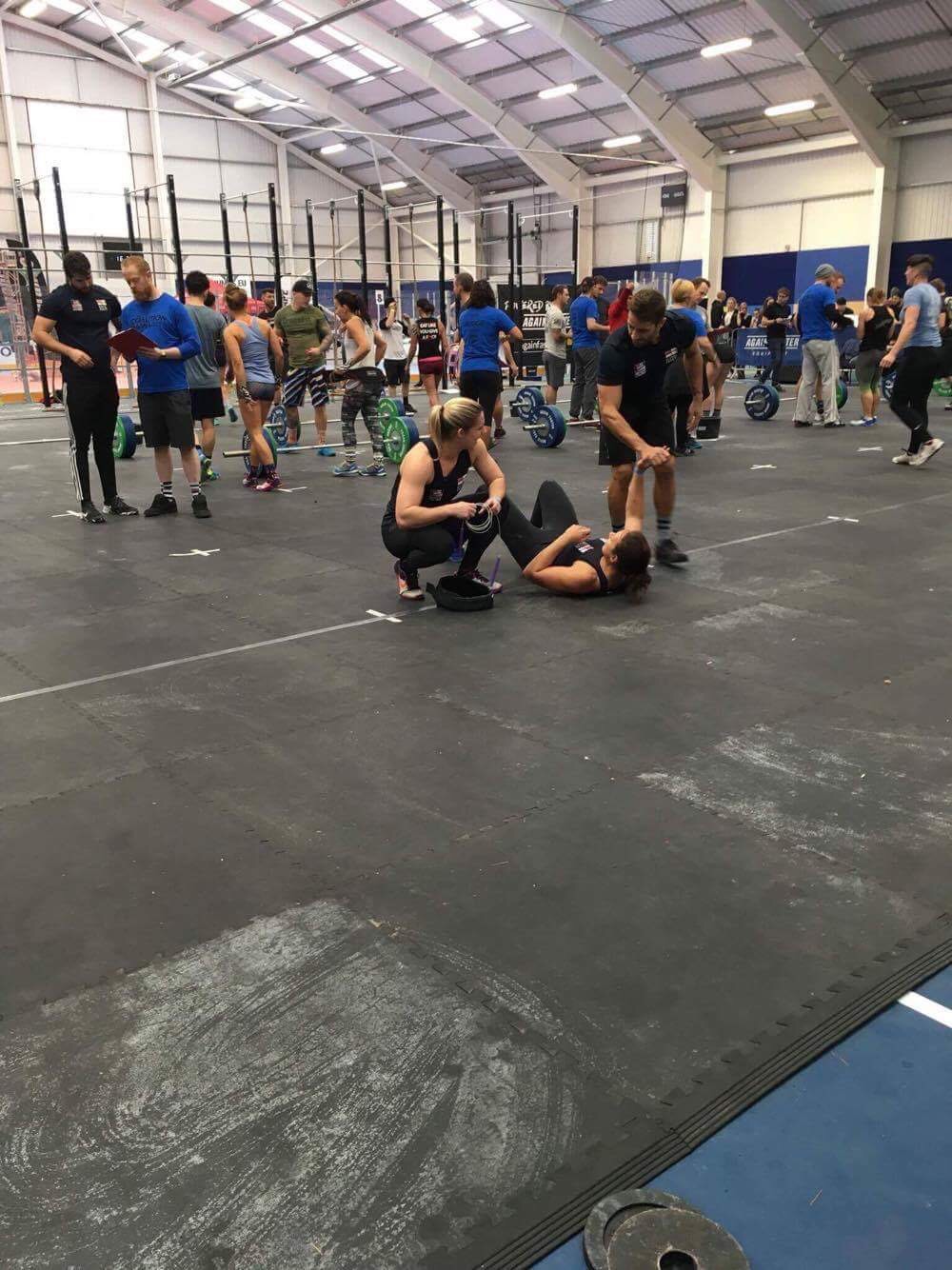 Looking at the leaderboard we were hanging on to the top 30 by a thread. Our aim for the weekend was to stay in the top 50% of 70 teams. So, we were doing exactly what we set out to, and more!

With not enough points on the table to make the cut, we knew we only had one more wod of the weekend to go. We were ready to give it absolutely everything and leave every last bit of energy on the competition floor. 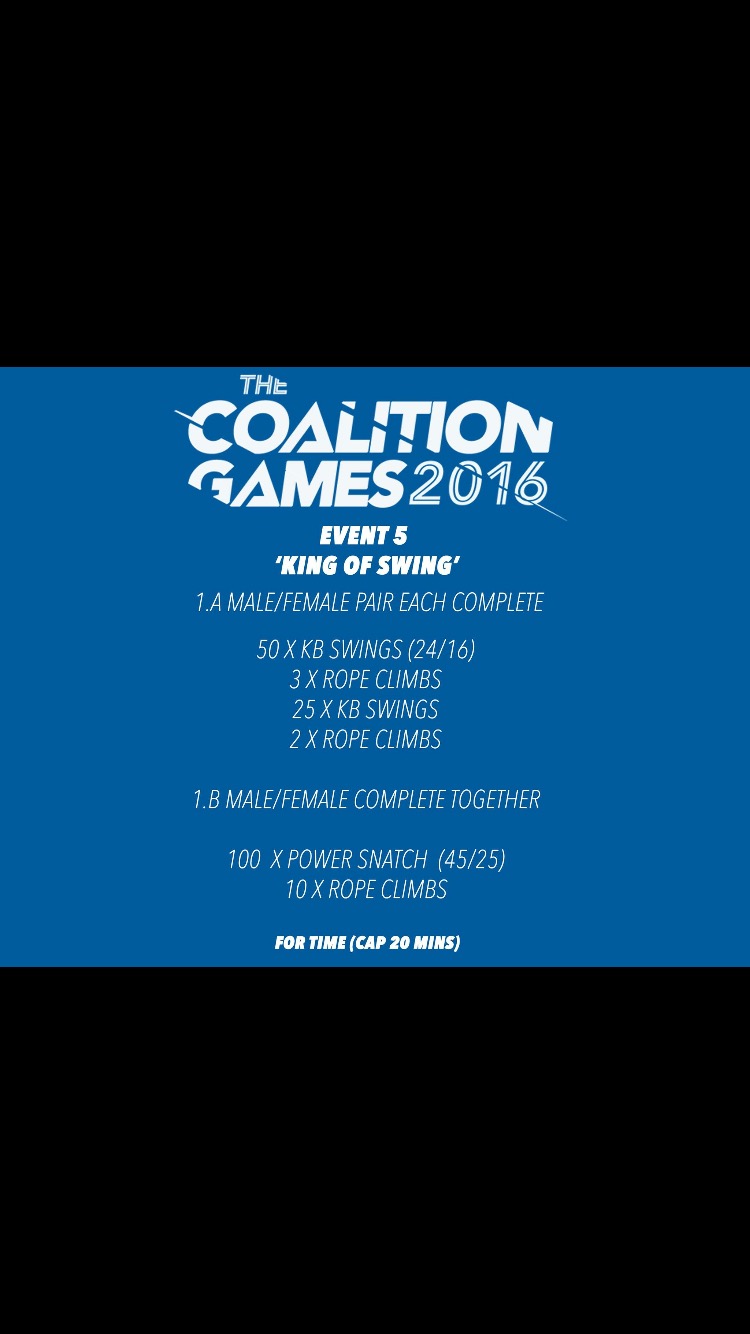 Being Sailors you’d expect our rope climbing to be top notch.. right? …

WOD TACTICS. Alex – great engine. Steve – great rope climbs. So, you guessed it, they took on the part A.

Watching my team mates absolutely blast through their KB Swings and then fight to the top of the rope, I felt so proud of them! I was in awe of their sheer determination. Steve by far had the best rope climbs in the arena and Alex had by far the easiest looking KB swings I’ve ever seen!

Parkey and I prepped ourselves to sprint to our barbells for the 100 snatches. I cannot tell you how we partitioned the reps – I genuinely cannot remember. It’s a blur in my memory! I can only remember pushing my body to its limit. I wanted to get through as many reps as possible as I felt Parkey had a disproportionately heavier barbell than I. We had also agreed that I’d take the brunt of the snatches if he started the rope climbs! Again, no idea how many rope climbs I completed. All I know is, it felt amazing! The adrenaline was flowing and I was enjoying this wod more than any of the wods so far. The atmosphere was absolutely brilliant and I could hear the crowd cheering loudly.

Completing that final wod was incredibly satisfying. I was so happy with our performances throughout the entire weekend. I also had such a fun time with these guys. I have made three awesome friends I would 100% train/compete with or even just hang out with again. Top weekend. And a great weekend show casing some of the Royal Navy’s athletes.

Thank you to Alex Kelley for organising the team, and a thank you to Steve and Parkey for being awesome team mates.

The combined services didn’t go as well as I had planned. I weighed in @73kg and opened with a successful 200kg my second lift was again successful @215kg for my third I tried to break my own Navy record with a 225kg. Although I managed to lift it, it was a fail due to a slight hitch at the end.

Looking closely at the video my feet are just slightly too far apart, causing my knees to come in and lose power. However, I know I can lift it! Navy champs in December, I’ll get it then!